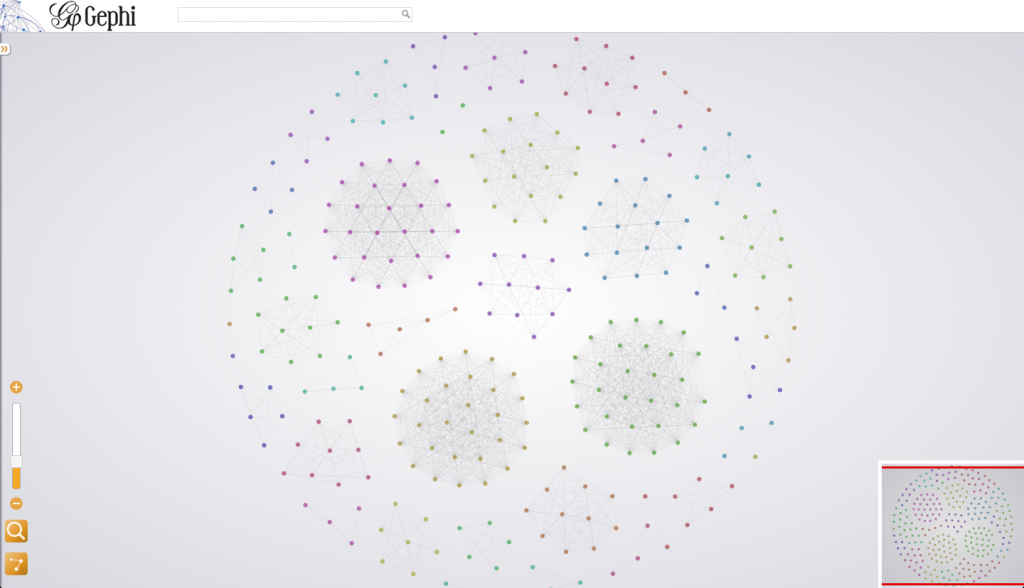 (click the image to view the interactive network page)

Yesterday I put up the first version of a graph of slave narratives, but I wanted to take a second, closer look. On the second go-around, I improved the layout and the labels a bit, so that they now display the names of the author of each book-node.

Today I wanted to take a closer look at some of the features in the graph. The first thing I did was look to see where some of the most well-known narratives show up. Doc South’s collection isn’t strictly all slave narratives, but I’ll leave that for another day.

Below are some screenshots of what I think are the most interesting features of this network’s topology. If anyone wants to play along at home, you’re welcome to download the node and edge tables I’m using here. The nodes table is pretty self-explanatory. The edges table uses the topic model tool’s contribution to doc as the edge weight.

For the images below, click on each one to open it in a new tab to get a better look.

Well, according to this graph, pretty much all over the place. Almost everything he wrote shows up in different places in the network. Talk about a versatile guy. 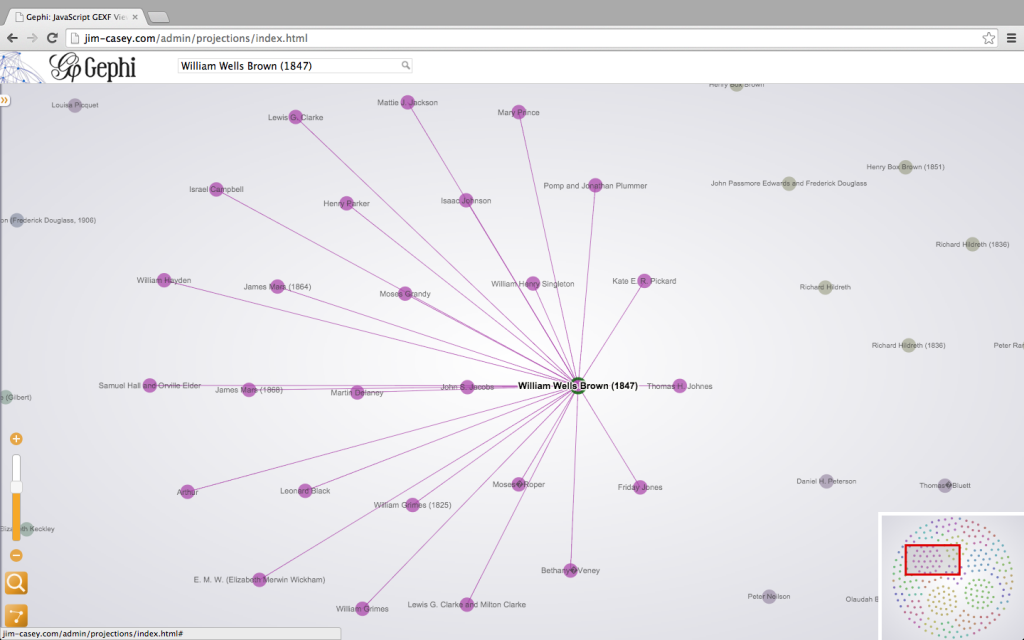 William Wells Brown in another narrative in 1849. 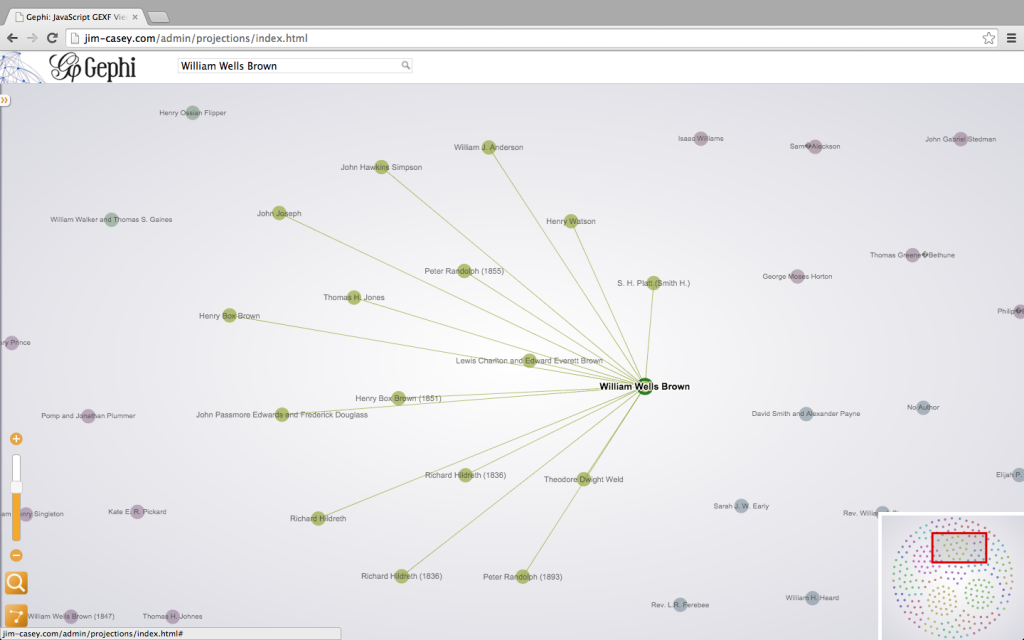 In the 1850s, he wrote Three Years in Europe (1852) and The American Fugitive in Europe. Sketches of Places and People Abroad (1855). (There’s an interesting cluster of narratives written by women too). 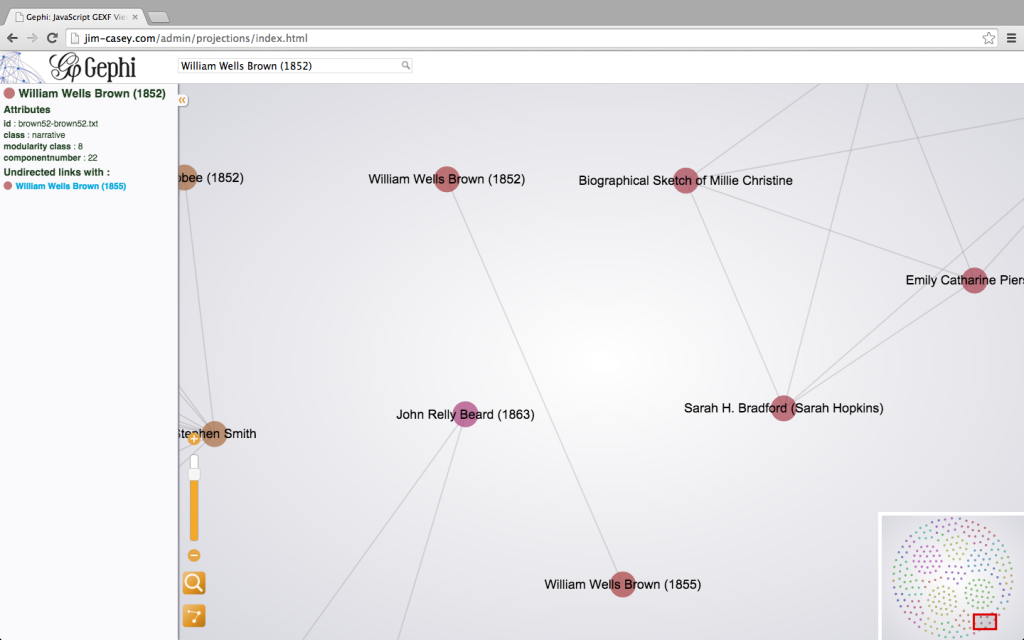 Then there’s Clotel, the novel William Wells Brown published in 1853—one of the earliest black novels. 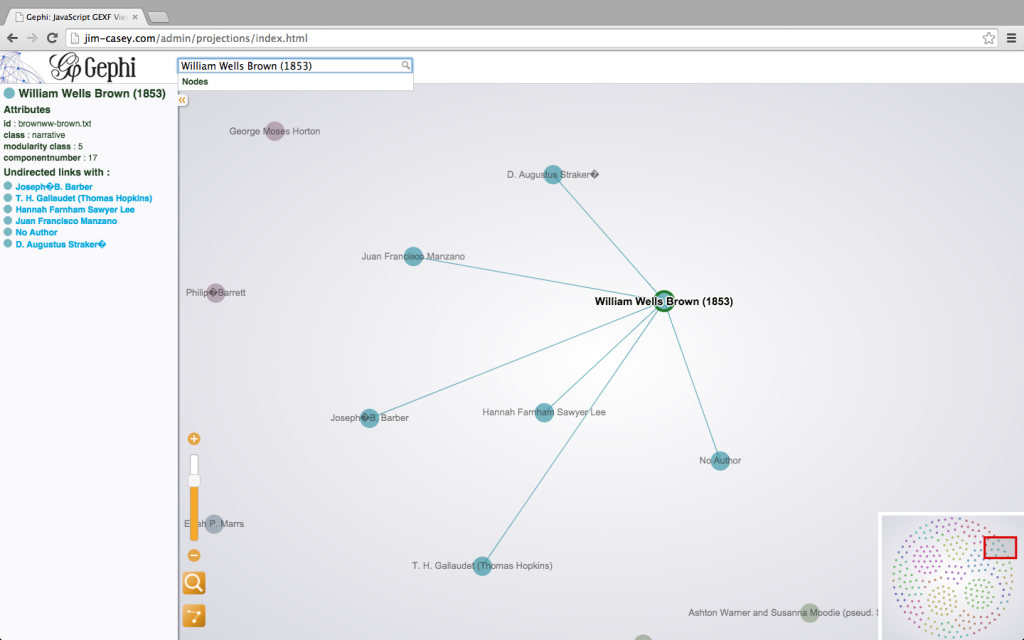 William Wells Brown was still going strong in 1880, up to new things in My Southern Home. 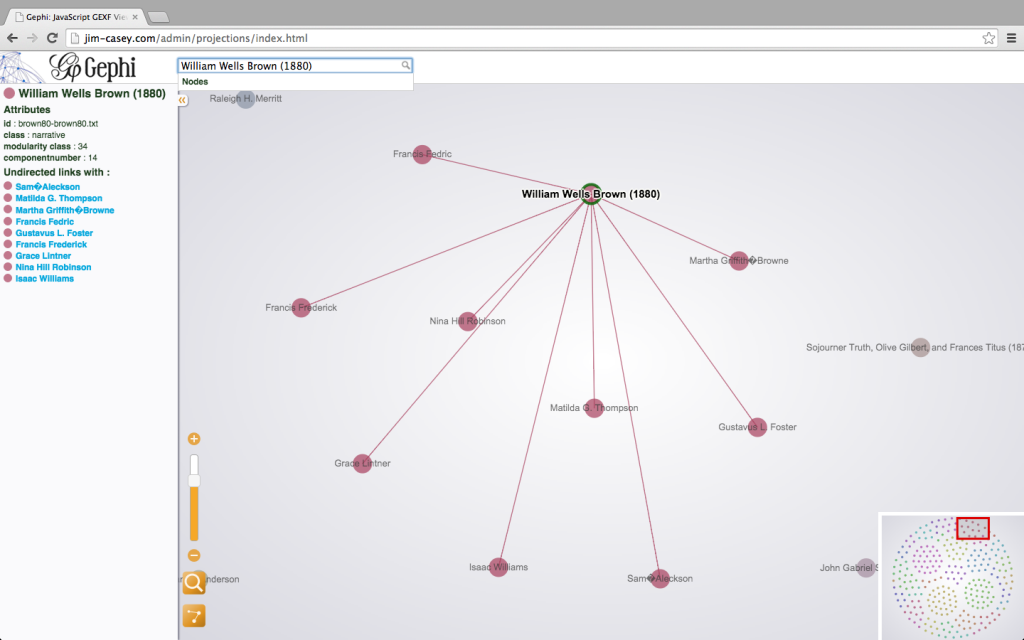 There’s lots of other stuff to explore in this network too. For example, some components seem ripe for compare-and-contrast exercises, like this triad that connects two works by John Relly Beard to one by Robert Norris. How are they similar? 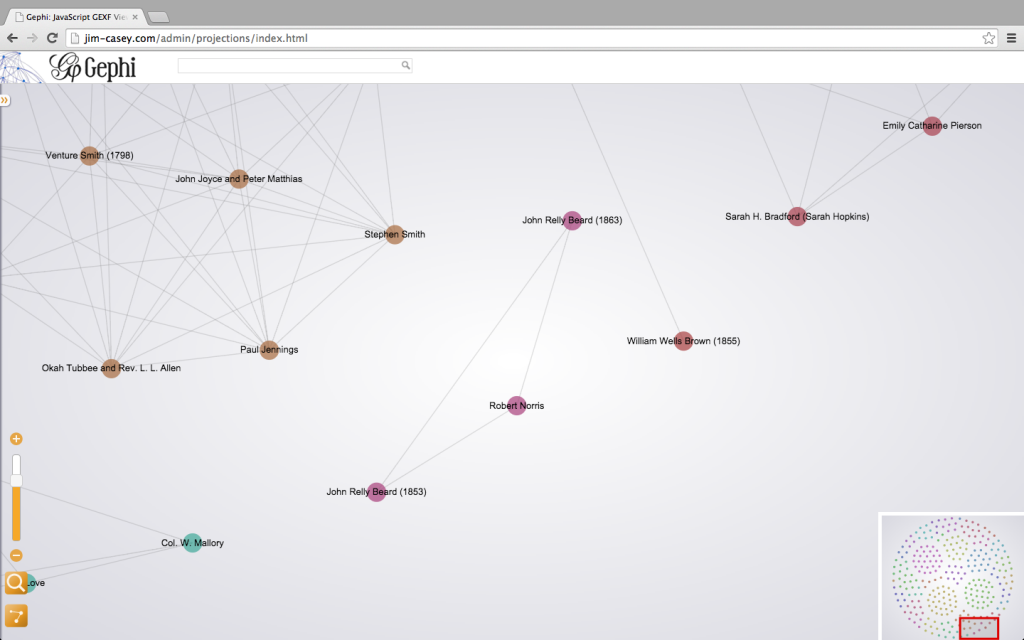 Frederick Douglass shows up in some interesting ways too. His 1853 narrative is distinct from the others, as here. 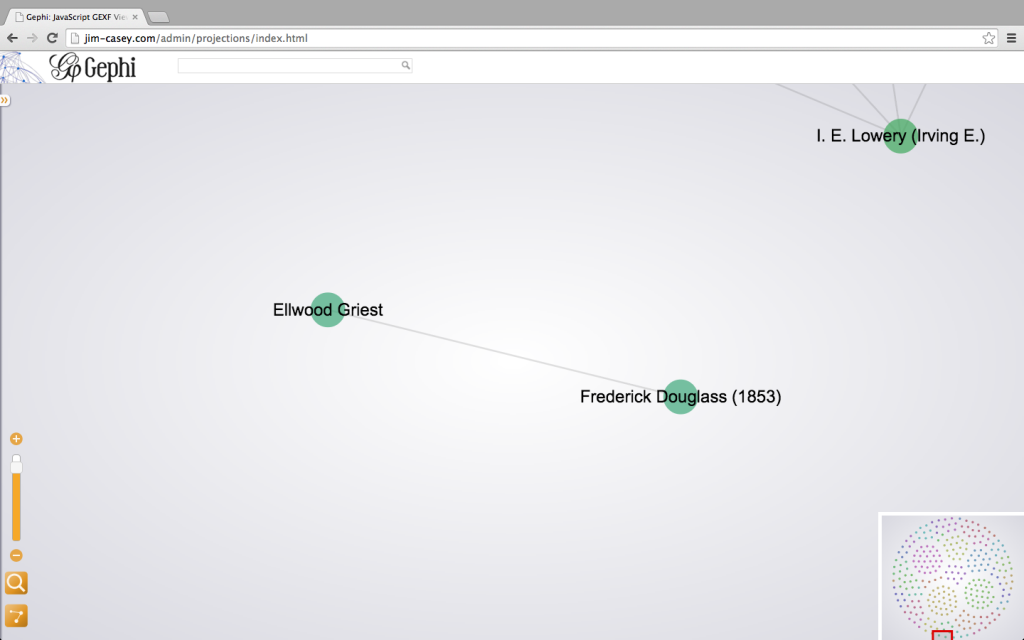 Frederick Douglass’s other works are pretty similar by topic in this component. 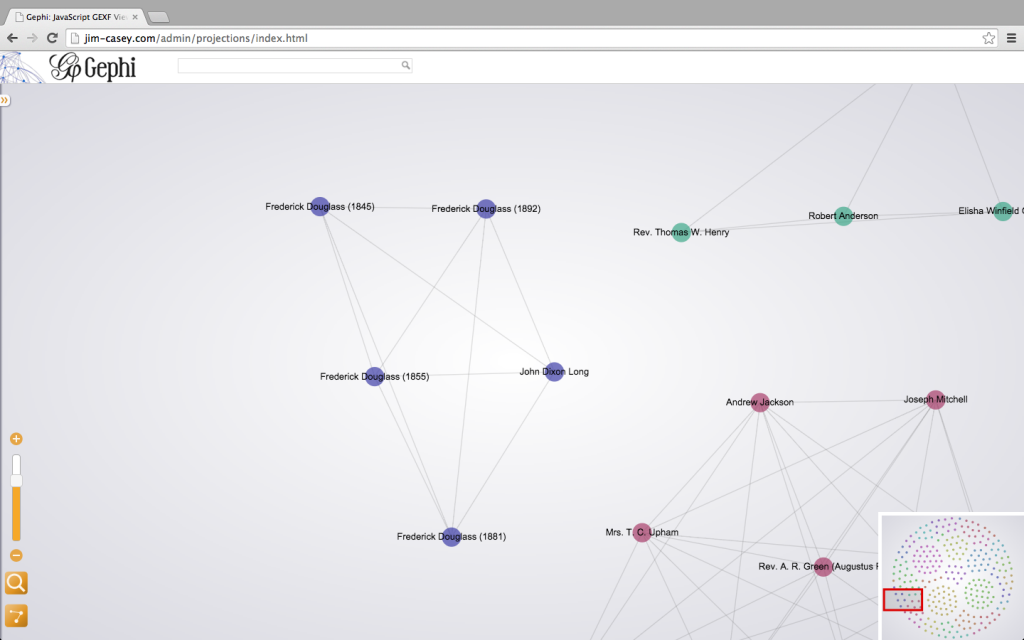 Sojourner Truth’s narrative has long had a complicated authorship, but at least the 3 versions of her narrative are relatively alike in topic. 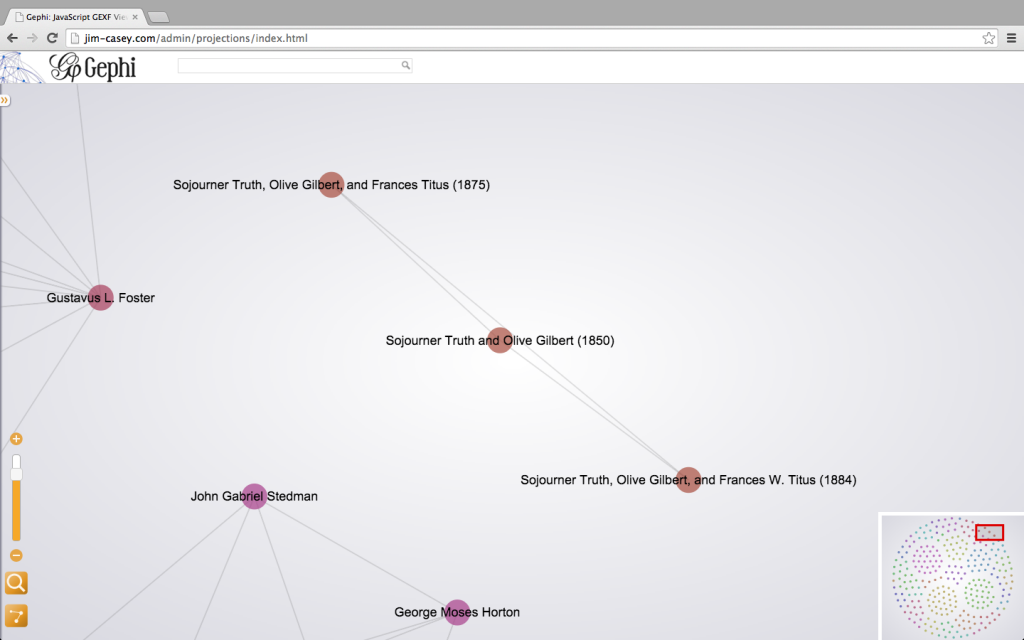 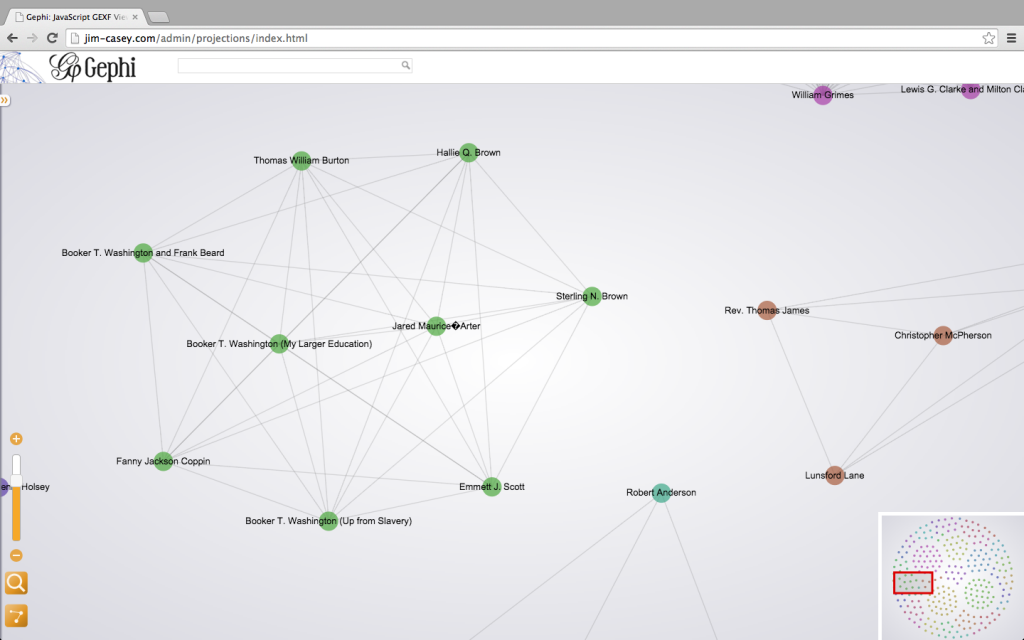 Lots more to explore, I’m sure. If you find anything, I hope you’ll share.

Convention Delegates Across the Divide | Ante/Post

Edit August 4, 2016: we’ve been selected for inclusion in the 2017 MLA Convention Presidential Theme, “Boundary Conditions.” Edit May 19, 2016: Accepted! Cross-posted from http://sarahhsalter.net/?page_id=147 This roundtable invites consideration of how acts of collaboration and editorship Read more…

There is no excerpt because this is a protected post.